Two new Nepenthes ampullaria for the terrarium–so its time to give the Nepenthes hookeriana a haircut!

The terrarium has really powered along since I set it up again last year. Recently, I saw some Nepenthes ampullaria clones ex tissue culture being offered on the web. So a few clicks of the mouse later, I had ordered two plants. They arrived late last week. I love Nepenthes ampullaria (affectionately called amp or amps).

Today I potted the new plants up and did some tidying. Here is everything in the terrarium laid out (left to right, top to bottom): Nepenthes ampullaria green form, N. ampullaria “harlequin”, Drosera adelae, Sphagnum moss from the bog garden planted into a waterlilly basket, N. x hookeriana, Triffid Park clone. 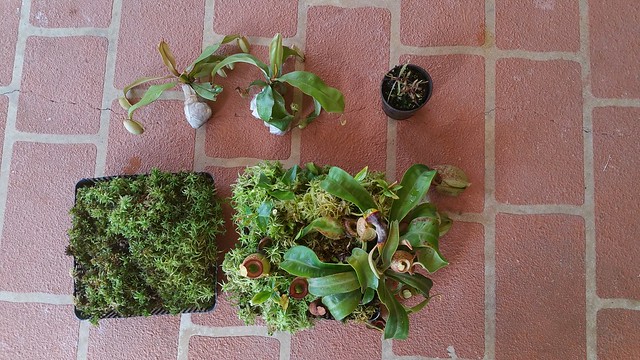 The sphagnum in the pots has been layered over 1 cm of washed gravel to keep it out of the water bath I have in the base to regulate temperature. The water bath contains two heaters – one set to 32 degrees Celsius that turns on and off with the light, and a second that is always on and set to 24 degrees Celsius – this give the plants a night-time temperature drop. Nepenthes hate wet root systems so the gravel is necessary to drain the sphagnum out and avoid the plants getting root rot. Note also the difference between the terrarium grown moss (right) and moss collected from under a canopy of Sarracenia (left). The terrarium moss grown under the 20W COB (hip-on-board) LED floodlight I use for the terrarium is a lot more straggly and somewhat etiolated, so it is a lot less strong than what the moss under a very dense canopy of Sarracenia pitchers get… 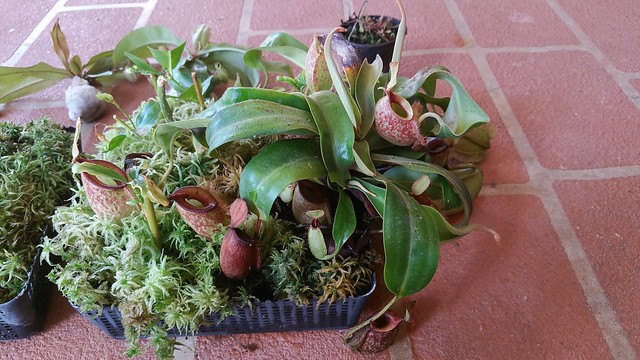 Stupidly, I forgot to take a photo of the tank before planting. But the photo above nonetheless shows that the Nepenthes x hookeriana I had planted in there has grown very well, producing some large pitchers. 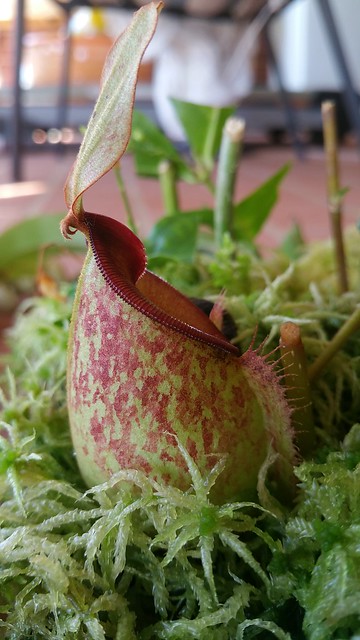 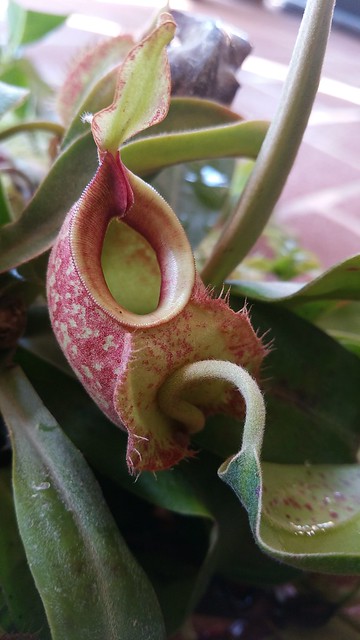 The idea to use a LED floodlight to light up the tank was inspired by someone on the CPUK forum who also uses a COB LED downlight for amps with great success. The idea is, the intense light source keeps the plant compact and gives it good colour. If the pitchers are produced a little too close to the light (such as the pitcher at right), the leaf distorts and the pitcher is about half the height of pitchers produced further away. The arrival of the amps was a great excuse to also give the hookeriana a trim; I got waaaay to big a plant than I needed at the time, and it needed to be tidied up to ensure its longevity in the terrarium. 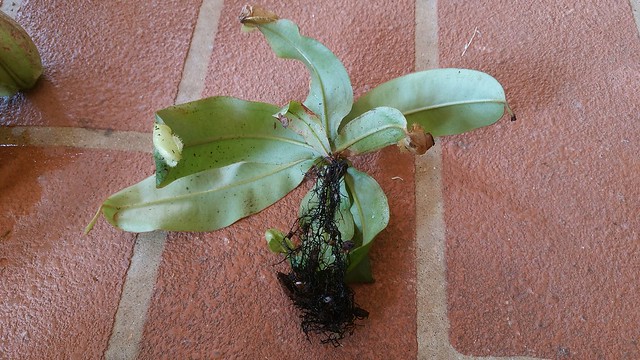 Here’s one of the amps, the harlequin form. Both plants had great root systems and had been well grown. The seller was http://www.plantculture.com.au/ and I would highly recommend them. They even sent me smaller plants than were advertised on my request, to accommodate my terrarium. This may sound like I was asking to be cheated, but my experience with Nepenthes and terrariums is to get a smaller plant when possible, so they will grow into the terrarium instead of outgrowing it. I learned this the hard way with the hookeriana… 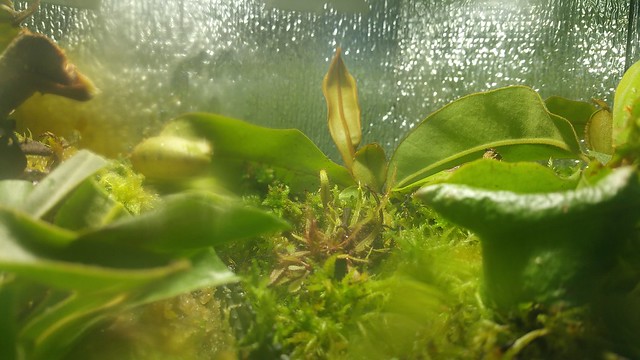 And here is the green form amp planted into the tank, with D. adelae in the foreground and a leaf of amp “harlequin” at right. To help reduce shock of messing with everything, I put the ultrasonic fogger on right away and will leave it on until late tonight. I’m tempted to get a multi-disc fogger to really steam the tank up, but the single disc unit is probably fine. The fogger also helps keep everything wet and watered. 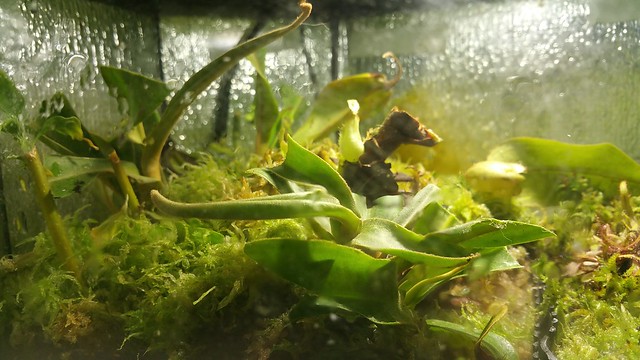 And here’s the hookeriana, reduced to a series of cuttings. The original stem of the plant (centre with pitcher) has started to produce basal pitchers; it will hopefully continue to do so. I’ll also have to watch to see if it regrows a new main rosette, as it is very woody. The cuttings will be well on their way again and pitchering in a couple of months. Hopefully they will be a lot more compact than before.

Posted by pitcherplantation at 4:23 PM 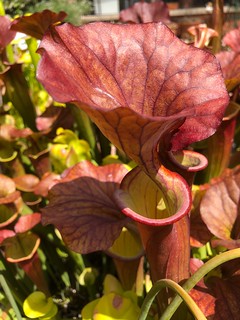 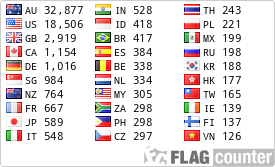